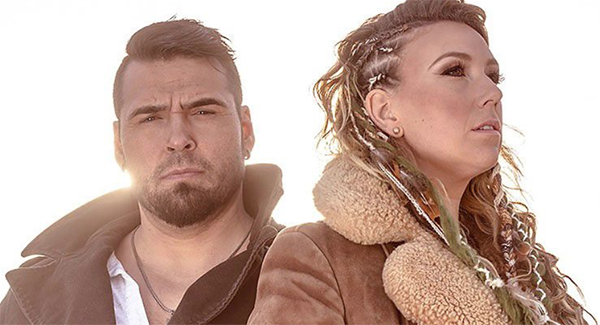 Multi-Award winning duo Twin Flames will push the boundaries of “contemporary folk”, with Indigenous, Inuit influenced songs that incorporate both western and traditional instruments Feb. 29 on The William Glesby stage.

Despite polar opposite backgrounds Twin Flames found a common musical language. This captivating duo combines singer-songwriters Jaaji  (Inuk Mohawk from Nunavik) and Chelsey June  (Algonquin Cree Métis) from Ottawa. Twin Flames takes the audience on a musical journey across Canada and the Arctic, they echo the voices of their ancestors and depict life on the land.

This husband-wife duo has now played over 900 shows in less five years with performances that have taken them across Canada, The Arctic, Greenland, France and The United States. What started as small flame has turned into a raging fire one that is staying lit in the hearts of fans and listeners.

Twin Flames band creates a sonic landscape that spans Canada and the Arctic. Honouring their ancestors, they sing songs in English, Inuttitut and French. Consecutive year winners 2016 and 2017 of The Canadian Folk Music Award; Aboriginal Songwriters of the year. This multi-award-winning husband and wife duo is made up of Chelsey June and Jaaji both of Indigenous Backgrounds. Jaaji is Inuk and Mohawk from Nunavik and Chelsey June Métis (Algonquin Cree) from Ottawa. Twin Flames push the boundaries of “contemporary folk”, with songs that incorporate both western and traditional instruments. Despite polar opposite backgrounds Twin Flames found a common musical language.

Twin Flames has now played over 900 shows in their short five years with performances that have taken them across Canada, remote Arctic communities, Greenland, the United States and France. What started as small flame turned into a raging fire, staying lit in the hearts of fans and listeners. Chelsey June and Jaaji write with a passion that comes from their souls and transcends into their musical creations. Together they share a great ability to wrap Indigenous/Inuit stories in traditional and non-traditional styles. Together they prove that music should be about how it makes the listener feel. With thought-provoking songs, they gently educate audiences on the realities of Indigenous, Inuit and Métis history as well as current issues.

In 2015 They released their debut album Jaaji and Chelsey June Twin Flames. In December, 2015 live at Cabaret la Basoche, they were chosen as favorite artists, the album received a total of five nominations from several different award platforms and their first win as Aboriginal Songwriters of the year at the 2016 Canadian Folk Music Awards. Jaaji & Chelsey June Twin Flames also made it to the top of music charts with their song Porchlight that reached #1 on The Indigenous Music Countdown’s top 40.

In June 2017 they released their much anticipated second album Signal Fire. With Signal Fire Twin Flames further pushed the boundaries of contemporary folk. Signal Fire incorporates both western and Indigenous instruments as well as various traditional instruments from around the world. Signal Fire has gained much recognition. They won Aboriginal Songwriters of the Year for the second time at the 2017 Canadian Folk Music Awards. They also won two Native American music awards in the United States: Best Folk Album and Group of the Year.  “Ottawa’s Twin Flames win big at Native American music awards Duo’s seven nominations were the most ever for a single artist” CBC Signal Fire has earned an impressive 17 nominations total from several award platforms throughout Canada and the United States.

Most recently Twin Flames were chosen as artists in residence for Folk Alliance International 2019 conference, they were partnered with UNESCO to write the official song to celebrate the International Year of Indigenous Languages. The song titled “Human” has been made a large impact in the international community and reached #1 on the Indigenous Music Countdown.

Fun Fact: Their music Video Broke Down Ski’tuuq nominated Best Music Video Recording Performance at the Native American Music Awards was the first Inuttitut music video to make it into Best Music Video Category and onto Much Music. Twin Flames are always proud and honored to represent their cultures and diversity through music.

Before Twin Flames: Jaaji and Chelsey met in the summer of 2014 during the filming of the television series TAM (Talent Autochtones Musicaux) for APTN which both were chosen to appear as individual artists. The night before filming began, they sat around a campfire with the crew, their voices met in harmony before they knew each other’s name, a match so perfect right from the start. That evening marked the beginning of their trademark melodic harmonies and their journey together in life and music. Several months later the two decided to form Twin Flames. They married in September of 2017 surrounded by their combined family of six children.

The joining of the two artists was in a sense an experiment. Jaaji was already well known across the Arctic and his music was loved and embraced by many. Chelsey also had a following of fans that had taken to her roots storytelling music. Releasing an album that included three languages and starting out on a summer tour in 2015 was a gamble. The pair were not sure how they would be accepted because of language barriers in the North and the South. Would the Inuit people be open to Chelsey June’s English/French language music? and would the people of the south be open to Jaaji’s Inuttitut language music? The first Summer tour turned out to be a great success! The openness did not always come right away but once people heard the music of Twin Flames the barriers seemed to disappear. Together they prove that music has an awesome power to connect people from everywhere and that love is all around us if we choose to see it.