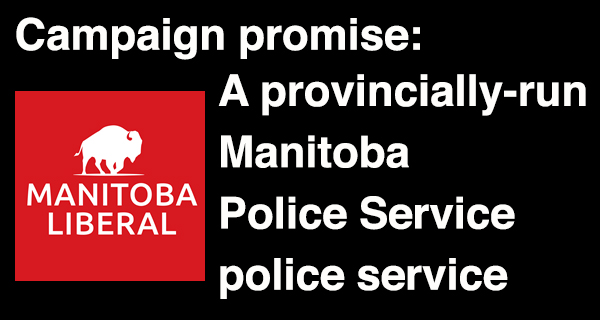 “For too long, Manitoba has had some of the highest crime rates in Canada. Under the PCs cuts and inaction, it is only getting worse,” said Lamont. “There are too many gaps in policing in Manitoba due to years of budget cuts and it is time to invest in a solution that will work province-wide.”

Lamont said a Manitoba Liberal Government would create the Manitoba Police Service by working in partnership with First Nations, the AMM and other stakeholders.

Recruits will be trained and reflect the population in Manitoba.

“The goal of the Manitoba Police Service is to have policing delivered by people from the community so we can build long-term trust with law enforcement and people can feel safe in their communities,” said Lamont.

For many years, Manitoba has faced challenges of elevated crime rates, not just in the City of Winnipeg, but in rural and northern Manitoba. Budget cuts have spread resources thin — creating challenges for police and communities alike.

When it comes to the RCMP, there are challenges as communities have lost their detachments. Under the current model, staffing is light as RCMP officers may work alone. Posts may be filled by relatively new recruits who come from outside the community for relatively short periods of time, who then move on and the process repeats itself. Because new officers are regularly being posted from outside the community, it creates challenges for police and community alike, especially where there are cultural barriers.

Because RCMP policy is set by Ottawa, communities and the Manitoba government have to appeal to Ottawa if changes or policy are required. Policing is also one of the major costs for municipalities across Manitoba.

A Manitoba Liberal Government will create a Manitoba Police Service to provide unified, province-wide police service to complement the work of the RCMP and municipal law enforcement.

The benefits of a Manitoba Police Service include